Recently, the Northern Sea Route research group of the GI-CoRE Global Station for Arctic Research has analyzed ship tracks from 2014 to 2017. This figure shows ship tracks in 2016’s summer seasons (from July to November). Here, trajectory records of 2,773 ships were detected in the NSR area by Satellite-Automatic Identification System (Satellite-AIS).  The Barents Sea and Kara Sea areas are the busiest areas among the Russian Arctic waters. And not only ocean-going ship but also many river ship activities can be found in the great rivers. These datasets enable us to analyze navigability of ships in ice infested waters. The first step of research result is going to be published on the “Journal of Japan Society of Civil Engineers, Ser. B3 (Ocean Engineering), No.74″ in this autumn. The title of the paper is “Relationship between sea ice condition and navigable speed along the Northern Sea Route”, written by Profs Natsuhiko Otsuka (GSA Dir.), Xiaoyang Li, and Koh Izumiyama. 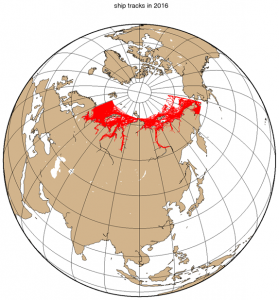